“I Am Because We Are”: Community Building & Coalition Work

Senator Anthony C. Beileson, left, recieved a warm handshake from Dr. Martin Luther King at Anaheim in March 1968 at the CDC convention endorsment from the democratic U.S. Senate primary. Looking on is Senator Mervyn M. Dymally, who brought Dr. King to the Convention for a luncheon speech to delegates.

Mervyn M. Dymally’s political career and success was grounded in his commitment to coalition building. Dymally’s early work with the labor movement in Trinidad provided the impetus for creating a community-focused foundation in South Central Los Angeles. Historically, South Central had been the center of the African American and African immigrant community, and by the early sixties had also become the home of its working class. Dymally served as coordinator for Senator Robert F. Kennedy in 1968. Dymally collaborated with a small number of Black and Latino leaders throughout the sixties and seventies pushing for multicultural coalition building. His coalition work is based on the Poor People’s Campaign, which began with Martin Luther King Jr. in 1967. The campaign sought to build a movement that could unite poor and impacted diverse communities across the country. The campaign was established to demand federal funding for full employment, a guaranteed annual income, anti-poverty programs, and housing for the poor.

Early in his political career, Dymally was sensitive to the injustices facing various communities. In 1966, following the Watts rebellion, the California legislature enacted a bill making it a crime to "incite" any riot. Dymally condemned the bill as reflecting a mood of hysteria, referring to Executive Order 9066, when the Japanese were expelled from the state and caged behind barbed wire at Manzanar. Due to his concern for diverse racial/ethnic groups, and support of programs that benefit diverse communities the Japanese American Democratic Association of California showed full support of Dymally in the 1966 Democratic Primary Election. Dymally put forth a congressional resolution that addressed hate-crimes against Arab Americans during the Gulf War. 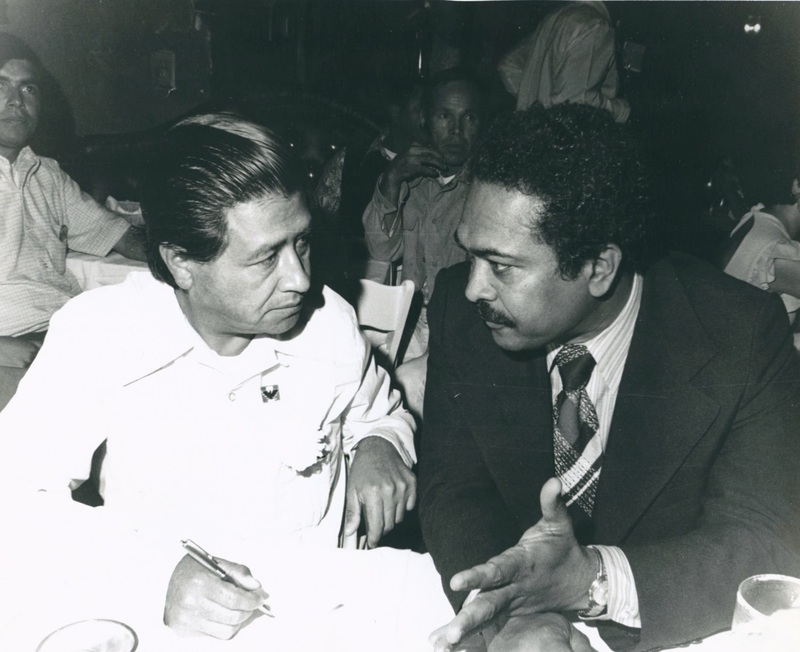 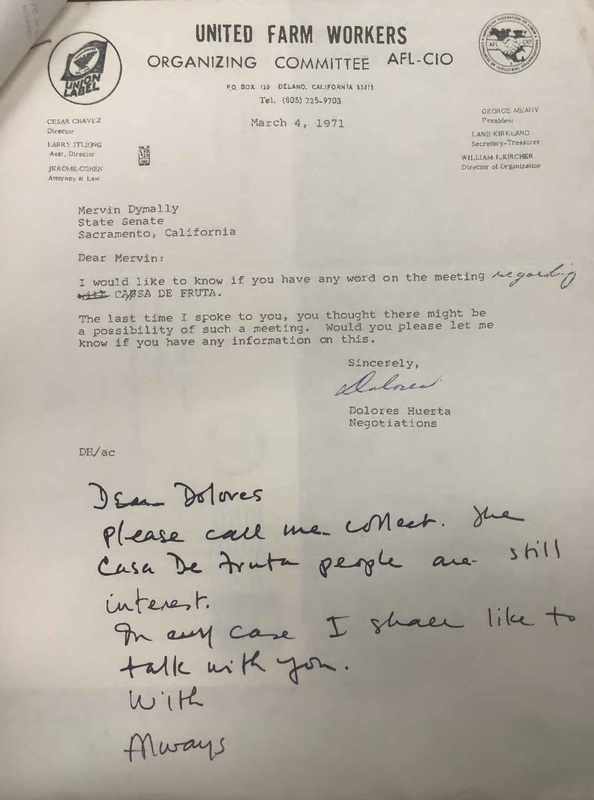 This letter written to Senator Mervyn Dymally by United Farm Workers Union Cofounder Dolores Huerta on the fourth of March in 1971, asks about his interest in meeting with the Casa De Fruta workers.

Dymally galvanized the poor, working-class, diverse communities, and labor unions to improve issues of employment, income, housing, healthcare, environmental racism, public transportation, and economic development. In 1962, the National Farm Workers Association (NFWA) held its first convention in Fresno, California, establishing a multiracial movement that resulted in the United Farm Workers (UFW). The movement was ignited by Filipino and Mexican farmworkers who refused to pick grapes unless they were paid proper wages and provided stable housing conditions.

Cesar Chavez and Dolores Huerta led the movement that became the most successful consumer boycott in the history of the United States, the Delano Grape Strike and boycott from 1965 to 1970.  Dymally first met Chavez and Huerta on the historical march and remained close friends over the years.

Dymally was committed to the representation and participation of underrepresented groups in politics. His entry into politics began with the National Association for the Advancement of Colored People (NAACP). He joined the association in 1960 at the height of the Greensboro sit-in protests. In his autobiography, Dymally remembers the day he heard about the sit-ins and wondered what he was doing when there was so much work to do for the Black community. The vision and mission of the NAACP set the foundation of Dymally’s career to ensure political, educational, social, and economic equality for all citizens.

Dymally was an outspoken critic of harassment of elected officials of color throughout his political career. Congressional reports he commissioned in both 1986 and 1988 documented the experiences of elected officials of color. These reports explained a pattern of harassment by the Department of Justice, Federal Bureau of Investigations, and media experienced both firsthand and by colleagues. During Dymally’s tenure, racial violence intensified, as activists such as Medgar Evers ('63), Fred Hampton ('69), Martin Luther King Jr. ('68), and Malcolm X ('65) were assassinated. Dymally used his position to draw attention to the racialized vitriol pervasive in American culture and its influence on harassment by law enforcement.   Dymally used his position in office to note microaggressions experienced in real-time. For example, he reprimands a prejudiced border patrol agent on senate letterhead for poor treatment at the El Paso border.  Dymally used his political influence to stand against harassment and hold individuals accountable for targeting people of color. 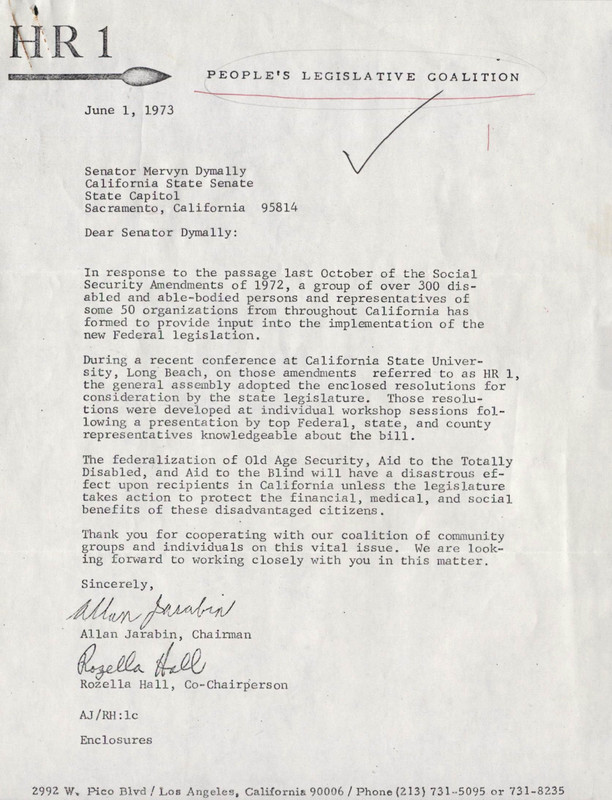 Letter from Allan Jarabin, Chairman and Rozella Hall, Co-Chair of the People’s Legislative Coalition to Mervyn M. Dymally in 1973. The letter is in response to the Social Security Amendments of 1972 to protect the financial, medical, and social benefits of disabled and disadvantaged citizens.

Dymally’s coalition work extends beyond the lens of race and ethnicity. In 1972 the People’s Legislative Coalition thanked Dymally for his cooperation and support on their input into the implementation of the Social Security Amendments that created a new federal supplemental security income program for the needy aged, blind, and disabled. The Los Angeles chapter of the Stonewall Democratic Club wrote a letter of endorsement. Dymally sponsored the 1990 Americans with Disabilities Act, which prohibits discrimination against individuals with disabilities in public life, including jobs, schools, and transportation.

Dymally's work in partnership with women engaged leaders at professional and grassroots levels and devoted resources to developing their political voice. Dymally's tenure in office coincided with the height of second-wave feminism. First-wave feminism focused on the franchise and legal rights, while second-wave feminists prioritized access to reproductive, family, and workplace rights. Though Dymally prioritized educational access policy, he also advocated for groups supporting working-class women of color and their intersectional experience, as the feminist movement was not inclusive of women of color.  This postmodern approach to feminism historians associates with third-wave feminism would gain wide acceptance in the late '80s and '90s. Dymally collaborated with formal organizations such as National Organization for Women, founded in '66, and the United Farm Workers, established in '66. He facilitated critical political and corporate introductions occasionally across the aisle as women-led organizations and Dymally's political career simultaneously gained influence.

Practical policy successes such as SB 907 and 1203 ensured access to college daycare through student government funds for enrolled parents benefiting both men and women. Dymally emphasized women's increased access to education through academic channels such as professional schools and non-traditional activist networks.

Dymally invested resources in surveys and mailers to women students, often surreptitiously asking about their experiences on campus. The prompt to share also allowed him to channel correspondence to active women's groups bolstering enrollment and campus participation. This empowerment of emerging activists ensured that he had a willing cadre of supporters willing to raise awareness and spread women-led organizations' influence—his investment of time and resources in connecting women nationwide in advocating for equality on their terms. Dymally's correspondence with women activists reflects dignity and demonstration of effort to invest in their cause's success. 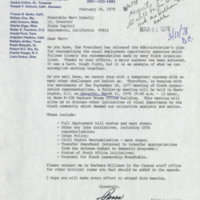 Letter from Parren J. Mitchell Chairman of the Congressional Black Caucus to Dymally. Mitchell is letting Dymaly know that the President has released an Administration plan for equal employment opportunities. 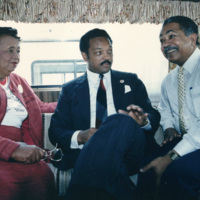 (Right to Left) Dr. Dorothy I. Height, Jessie Jackson and Mervyn M. Dymally during the Black Family Reunion Celebration. The four-day celebration was sponsored by the National Council of Negro Women, Inc. 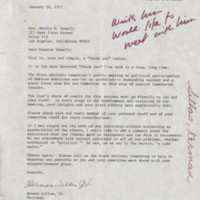 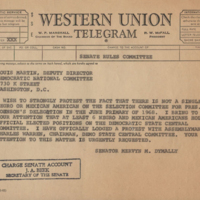 Mervyn M. Dymally sends a telegram to Louis Martin, Deputy Director of the Democratic National Committee in protest of President Lyndon B. Johnson's lack of people of color in his delegation, more specifically, "Negros and Mexican Americans". 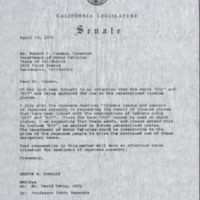 Senator Dymally writes to the director of the DMV about their recent approval of racial slurs on personalized license plates. 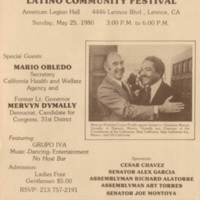 A flyer for the 1980 Latino Community Festival put on by the Hispanic Caucus. 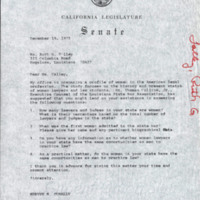 Dymanlly invites Ruth G. Tulley to answer a few questions regarding the history and present status of women lawyers and law students. 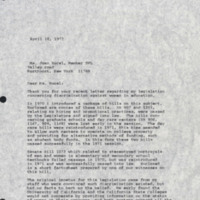 Dymally thanks Ms. Bucel for writing a letter to him regarding his legislation about discrimination against women in education. 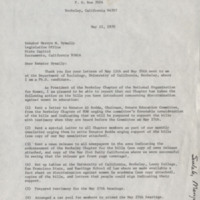 In a letter writen by the president of the Berkeley chapter of the National Organization of Women, Marijean Suelze thanks Dymally for writing two letters to the Department of Sociology. 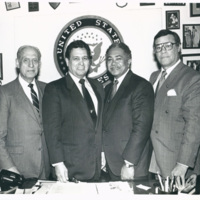 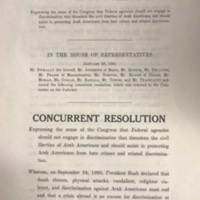 During the Gulf War (Aug 2, 1990 – Feb 28, 1991) hate crimes against Arab Americans increased, and the FBI questioned Arab Americans. This resolution put forth by Dymally in 1991 sought to curb baseless interrogation by the FBI, while increasing investigations of hate crimes. 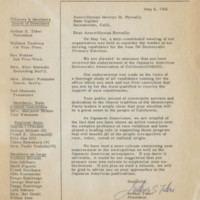 In a letter to Dymally, Arthur S. Takei mentions that Dymally has been endorsed for the June 7th Democratic Primary Election by the Japanese American Democratic Association of California.

← The Denial of a Human Right: The Inequality of Healthcare
Dymally's Foreign Policy →
“I Am Because We Are”: Community Building & Coalition Work