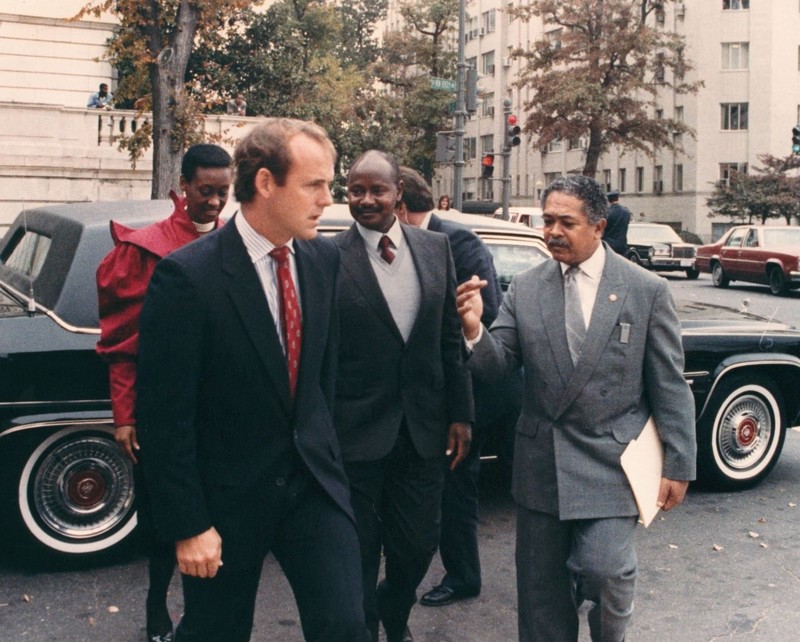 Mervyn Dymally and President Museveni of the Republic of Uganda

In History 3050 (Public History), we learned about Pan-African Studies and the importance of international politicians like Mervyn Dymally to Cold War and Post-Cold War Africa. Dymally was born in a humble environment that did not have the advantages of Americans living in the U.S. As a person from Trinidad, Dymally wanted to help countries like his own that suffered from various complex issues.

Dymally found an interest in foreign policy, and in his years of office Dymally had the opportunity to sponsor multiple bills that promoted peace on the African continent. Dymally was especially interested in South Africa, and made contributions to helping South Africans during the 1980s, when the country was still run by the racist apartheid government. This section describes a lot of political issues related to South Africa and the amount of damage that was inflicted on the country and its people by apartheid. Dymally also made many contributions relating to other African nations, for example Namibia, Sudan, Ethiopia, and Somalia.

As a congress member (1981-1993) who at different times headed the Congressional Black Caucus, the Foreign Affairs Subcommittee on International Operations, and the Subcommittee on Africa, Dymally was heavily engaged in traveling, communicating, and aiding those in Africa through education, as well as helping to stop violence and work with African politicians on various issues. Dymally also worked on African issues during his tenure in the California State Assembly (1963-1966, 2002-2008). Some of Dymally’s contributions are visible in the many bills concerning Africa that he sponsored, both in the US Congress and the California State Assembly. These included Bill 1089 of the California State Assembly, which proposed that California prohibit trade with Sudan because of the Sudanese government’s responsibility for the Darfur Genocide. While the Second Sudanese Civil War was taking place (1983-2005), Dymally acted as a peace mediator. Dymally also sought a resolution to the crisis in Namibia, which was influenced and de facto controlled by South Africa, which imposed apartheid on its neighbor. Dymally realized the U.S interest in the vast resources in South Africa and proposed the solution of sanctioning South Africa until the crisis was resolved, and forestalling any communist influence in the region. Dymally worked with many famous world leaders like Zaire’s Mobutu Sese Seko, Cuba’s Fidel Castro, and the Palestinian Liberation Organization’s Yasir Arafat. On a trip to central and Southern Africa with his daughter, Lynn Dymally, in 1989, the elder Dymally even interviewed Mobutu for a Hearing before US Congress, a record of which is included in the documents here. These are just some of the many examples that display how Mervyn Dymally contributed to promoting stability in Africa and the rest of the world.

This says that Dymally cared deeply about underrepresented populations throughout the world, including in Africa. Africa still was suffering from the legacy of colonization, and neocolonialism (economic colonialism) was still in practice even after formal colonization had largely ended. Dymally helped to address turmoil and suffering by seeking peace on his trips to various African countries and through the many bills he introduced to Congress about these issues and possible solutions. 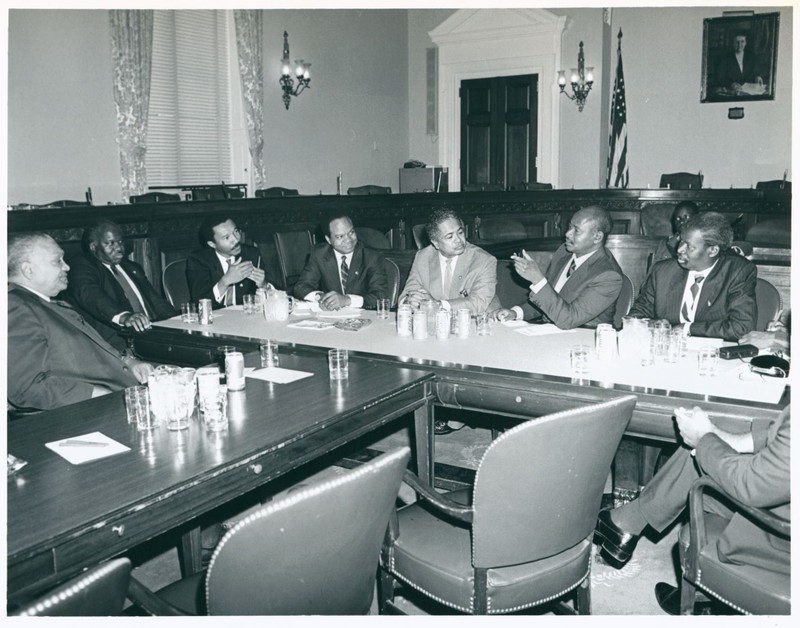 Mervyn Dymally and the Republic of Uganda President Museveni

Mildred Mulenga, a correspondent for The Panafrican Press, wrote this article addressing how Dymally led a team from the US Congress to Sudan in April 1997, where they were to witness the signing of a peace agreement between the Sudanese government and the splinter group Sudan People’s Liberation Movement (SPLC). Dymally’s team was also there to gather information about the progress of the Second Sudanese Civil War, which had begun in 1983. The war involved different political parties. In the 1990s, international politicians began peace negotiations. With the help of international mediators like Dymally, Sudanese political parties eventually came to an agreement that would end hostilities in 2005.

In 2007, assembly members from California, including Mervyn Dymally and others, introduced a bill to stop California business with the Sudanese government and put pressure on the Sudanese government to end the genocide in Darfur. The first part of Bill 1089 shows the reader a timeline from 2004, which explains actions taken by the U.S. concerning Sudan. The second part of the bill describes how California should not allow companies to do business with Sudan. 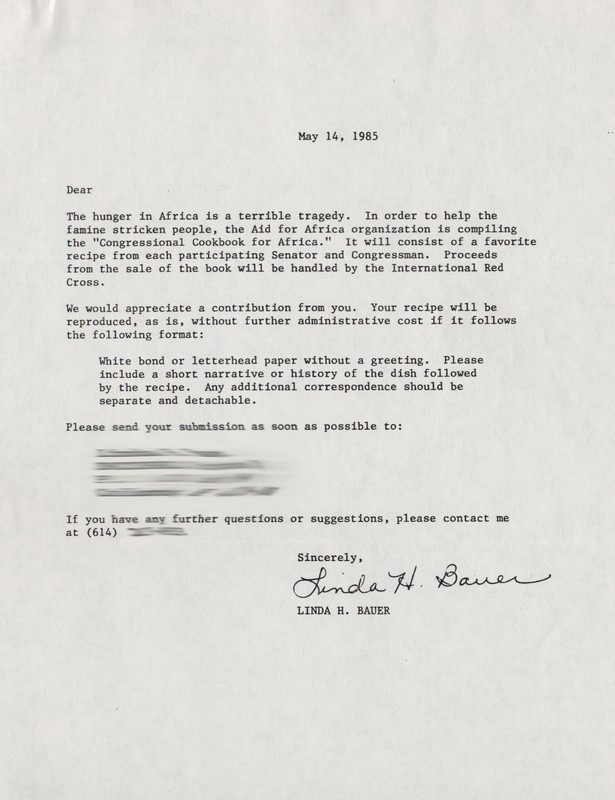 In this letter from September 1985, Representative John R. Kasich of Ohio urges Dymally to contribute to the “Congressional Cookbook for Africa”. This cookbook was being assembled by Linda H. Bauer, a constituent of the 12th congressional district of Ohio. Bauer proposes that all members of congress include their favorite recipe for the cookbook to support famine relief. Proceeds from the cookbook would go through the Red Cross for the purpose of aiding those affected by famine, likely meaning the famine that was then occurring in Ethiopia. This famine was the result of a drought, problems with crops, and intentional government mismanagement that resulted in the suffering of hundreds of thousands, leaving many starving and destitute. As the situation grew dire, more countries attempted to provide aid in different ways, this cookbook being one of them.

Slavery in Mauritania and Sudan,1996

In this document, Dymally addresses a joint hearing at the House of Representatives in March 1996, after he was no longer in congress. In his address, Dymally was representing the Mauritanian government. He argued that Mauritania was trying to actively root out slavery in the country through education and economic developments that were supported through loans from the World Bank. Organizations such as Human Rights Watch Africa disagreed with Dymally and claimed that slavery continued in Mauritania with little to no response from the Mauritanian government. See pages 28-46. 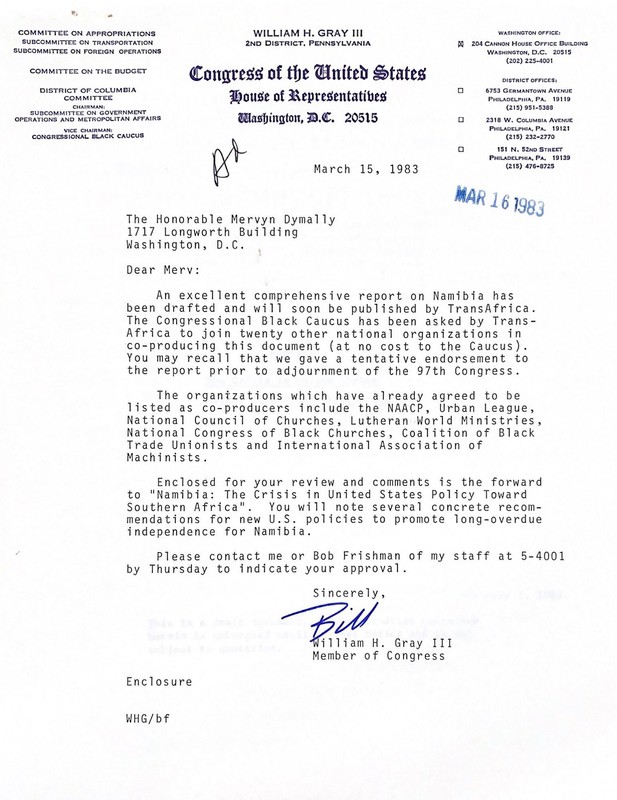 The following is a letter of March 15, 1983 on the situation and potential solution to the South African occupation of and apartheid policy in neighboring Namibia, which was under the control of South Africa from the end of World War I through 1990. The report, entitled “Namibia: The Crisis in United States Foreign Policy in Southern Africa,” was published by Transafrica. It stated that institutionalized racism was present in Namibia, and that there was a rise in violence connected to the denial of Democratic majority rule. The report was circulated to Dymally by congressperson William H. Gray III, who urged the Congressional Black Caucus, of which Dymally was chair, to sign on to and endorse the report’s proposals. The goal of the report was to get the US to facilitate peaceful Namibian Independence while not having the US risk losing business and forestalling Soviet influence. It provides a list of direct and strict recommendations that were to be issued to South Africa if they continued to oppress Namibia.

Little Ethiopia: How it Happened, 2003

The article explained how the “Little Ethiopia” community in Los Angeles began. In the 1980s, Dymally had played a key role in securing amnesty for Ethiopians, and he also played a key role in the neighborhood’s origins. In 2002, members of the Ethiopian community organized campaign fundraisers that supported Dymally’s run for the California State Assembly. The Ethiopian-American Advocacy Group, which secured backing for the neighborhood on Fairfax Avenue between Olympic and Pico to be designated Little Ethiopia, was formed at one of these fundraisers for Dymally.

The Political Crisis in Ethiopia and the Role of the United States, 1992

This document is the transcript of a Hearing in front of the Subcommittee on Africa and of the committee on Foreign Affairs of the US House of Representatives in March 1992. Mervyn Dymally was the chairman of the Subcommittee on Africa. The Hearing provided testimonies from five witnesses about the political conditions in Ethiopia. The main goal of the Hearing was to look at US policy concerning Ethiopia, as well as at the relationship between the US and the Ethiopian government. Dymally gave a long preamble on the conditions in Ethiopia, their historical precedents, and the significance of Ethiopia in the broader region encompassing the Horn of Africa. 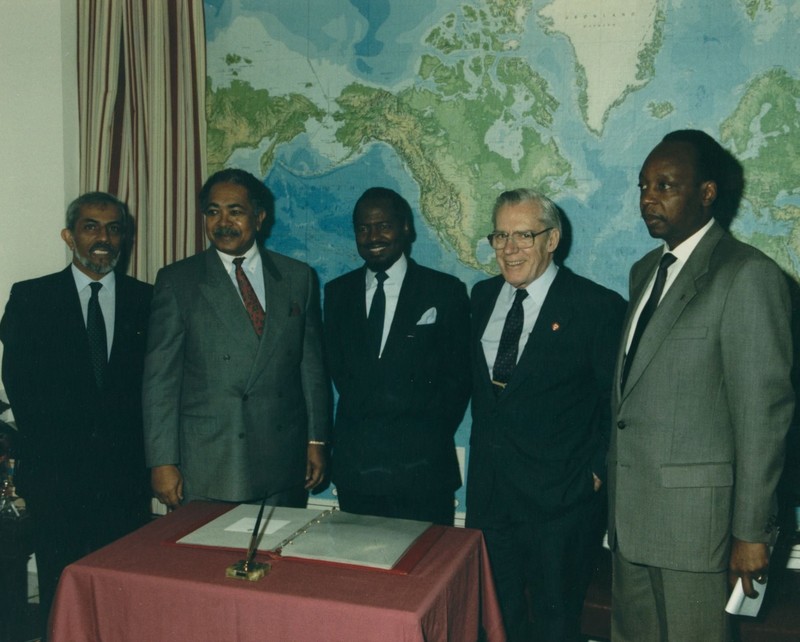 This article relates to Dymally as it primarily deals with his opposition to the actions taken by the Wake-up America charity organization. Dymally’s opposition to the group mainly came from the tactics the group used on the U.S. to sway the vote of US Congresspeople against sanctions imposed on the South African apartheid government. Dymally states that ″This is designed to intimidate liberals and to solidify the opposition of the right. ″ 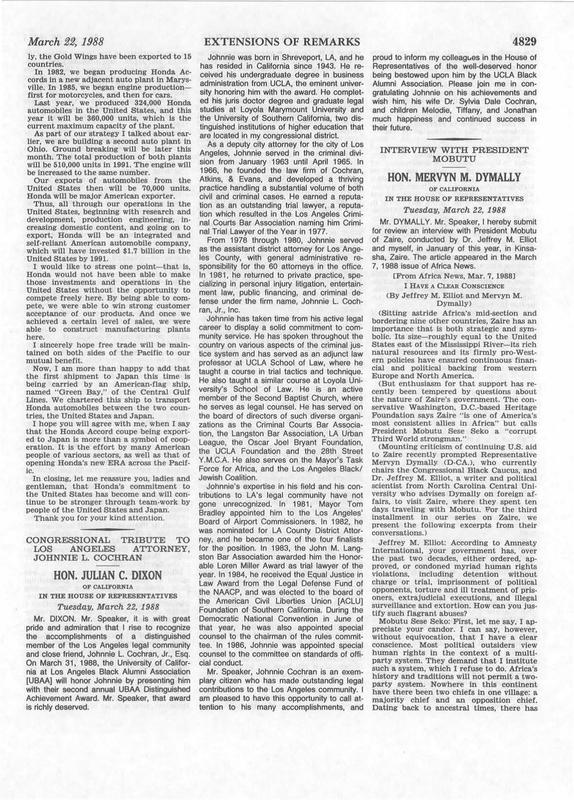 In these transcripts of a 1988 interview with President Mobutu of Zaire, Mervyn Dymally and Dr. Jeffrey M. Elliot openly criticize his government regarding human rights, corruption, healthcare, debt, and foreign policy. President Mobutu passionately refutes the criticism and praises Zaire for being a top-tier independent state that is prosperous unlike the other sovereign states in Africa. See page 4829. 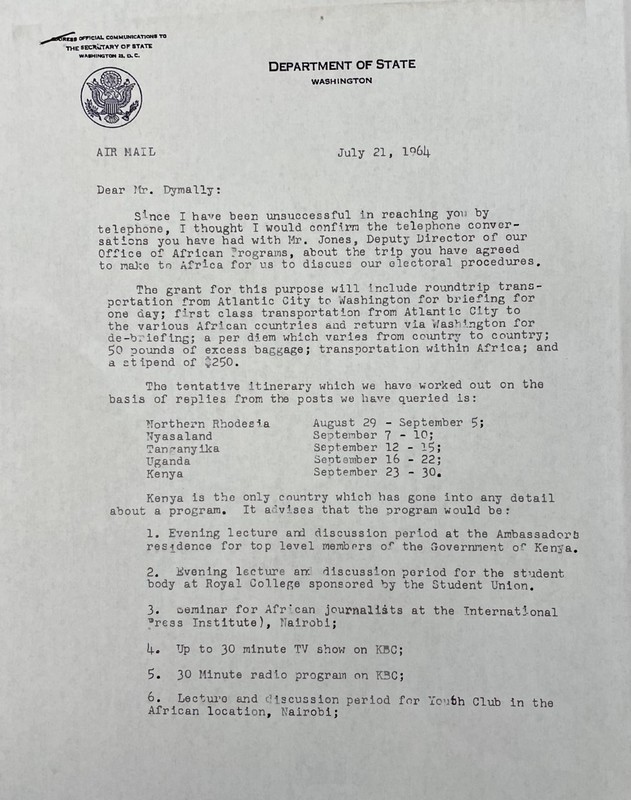 This is a series of letters written between Dymally and Martha G. Geesa, Program Officer in the Division for Americans Abroad of the US State Department, in summer 1964. The letters discussed travel fees to various countries in Southern and Eastern Africa, including Uganda, Tanganyika, Nyasaland, Northern Rhodesia and, Kenya, where Dymally was to discuss US electoral procedures. Kenya was the only country to release an itinerary of what Dymally’s visit would look like, from government meetings to TV appearances and visits to local schools. It is unclear whether Dymally ever took this trip; if he did, it was likely his first visit to Africa. 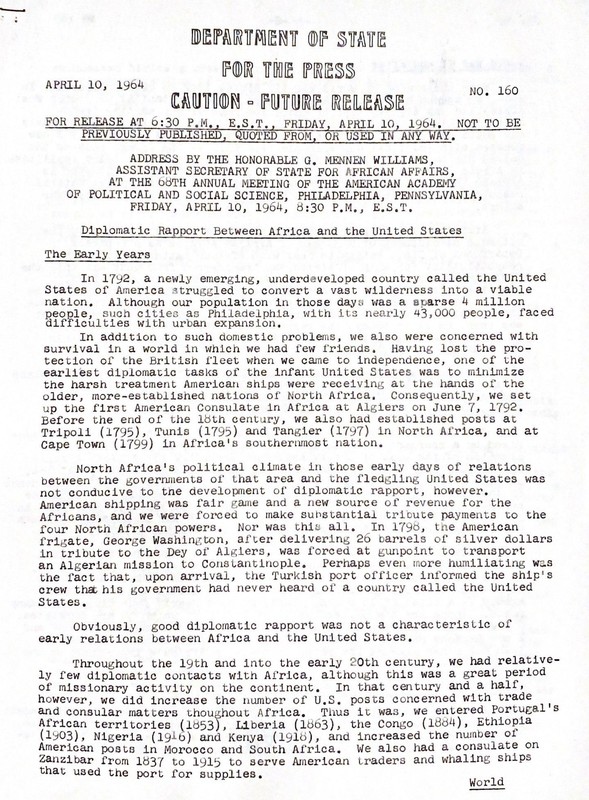 Diplomatic Rapport Between Africa and the United States; The Early Years, 1964

In this Address, Assistant Secretary of State for African Affairs G. Mennen Williams urges those present at the 68th Annual Meeting of the American Academy of Political and Social Science in Philadelphia, Pennsylvania to be more involved and concerned with the development of a rapport between the United States and Africa. At the time this was presented in 1964, many countries in Africa were newly independent or on the way to independence and Williams reminds those present that Africa is an important continent to be involved in, as it would serve the people of the United States well. This document came from the Dymally collection because Dymally was either at the meeting or received the document in preparation for travel to Africa. 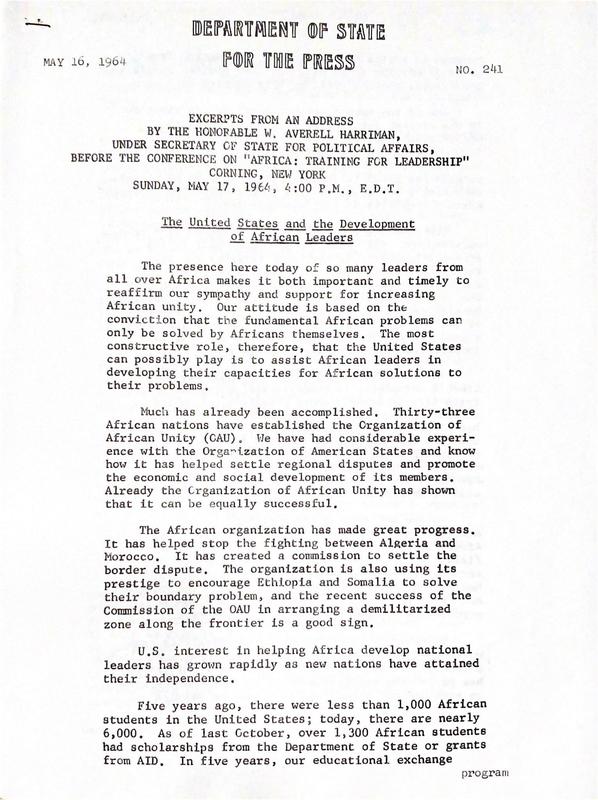 The United States and the Development of African Leaders, 1964

In May of 1964, the conference “Africa: Training for Leadership” took place and was addressed by William Averell Harriman, the former governor of New York and the Undersecretary of State for Political Affairs. In his address, Mr. Harriman described how the US was interested in improving relations with African nations that had gotten their independence a couple of years earlier. The document was found in Dymally’s files and indicates that it may have been given to him in preparation for a trip to Africa that he was planning in the same year. 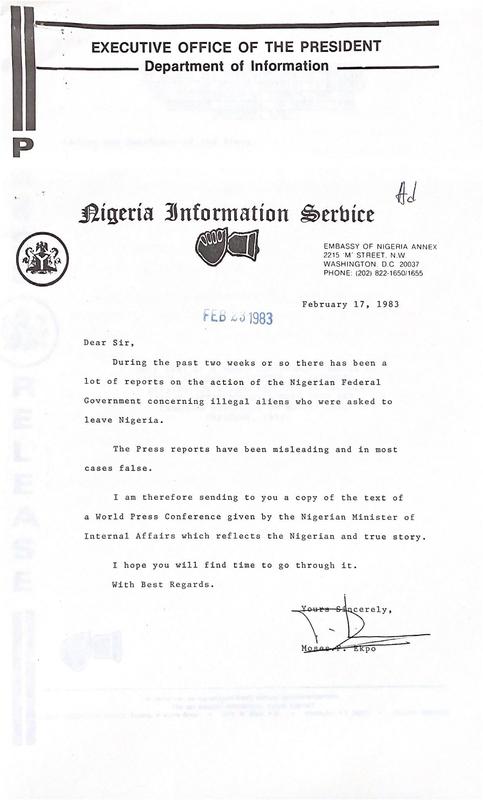 In this transcript of the press conference given by Alhaji Ali Baba, the Minister of Internal Affairs in Nigeria, he tells the press present at the Embassy of Nigeria Annex in Washington D.C. on February 14, 1983 about the immigration and “illegal alien” problem in Nigeria and how it is being dealt with. Ali Baba clearly states the law on immigrants and refugees in Nigeria and how they have followed United Nations regulations. He says that the refugees have violated terms which state that they can only stay in Nigeria for ninety days. The Nigerian government has declared their settlement a threat to their national security. At the time, many of the refugees in Nigeria were from Ghana, which was experiencing a famine. This document came from the Dymally collection and was sent to him by Moses F. Ekpo on February 17, 1983 in order to clear up what Ekpo called any “misleading press reports” on the “illegal alien” situation prior to this.

To view the rest of the Mervyn M. Dymally Papers, you may request them at Cal State LA Special Collections and Archives.

← “I Am Because We Are”: Community Building & Coalition Work
Processing and Interpretating the Mervyn M. Dymally Papers →
Dymally's Foreign Policy