The Denial of a Human Right: The Inequality of Healthcare

The history of healthcare in the United States is the history of exclusion to medical care due to inequalites, bias, and discrimination based on class, gender, race, ethnicity, and religion. The origins of women’s reproductive healthcare have roots in the history of slavery in this nation, as enslaved Black women on auction blocks, in estate homes, and plantations would endure the violent intrusion of their bodies. The history of "medical care," the treatment and care of people living with disabilities is abhorrent. Women were denied access to healthcare; and often relied on community practitioners for medical advice and care. Immigrant women in urban spaces were not provided adequate healthcare services, as xenophobia influenced “progressive,” reform organizations. At the turn of the century, indigenous women and Mexican women were sterilized while incarcerated. The federal government organized medical experiments, like Tuskegee in which Black men were infected with syphilis. Reports make clear that the Black community distrusts a medical community that has segregated medical care, and disingenuously operated with sub-par standards in the medical care of people of color.

In 1978 Dymally and Mary R. Warner wrote a piece called “Obstacles to Health Care in the Black Community: The Denial of a Human Right.”

Yet, despite its importance, health care has never really gained prominence as one of the key human rights issues. We have tended to cite education, employment, housing, and criminal justice as the “Big Four” issues, while health care has come in a poor fifth--- it that. This fact is curious, at best, since the consequences of deprivation of human rights are manifested in mental and physical health. Conversely, without good health, other rights cannot be exercised and this becomes relatively meaningless. Quality health care therefore, out to be --- and must be --- guaranteed as a basic human right.

Striving toward this goal, Dymally fought for increased representation of Black physicians and medical professionals and improved access to health care in underserved areas like his congressional district. He introduced innovative legislation in 1973 to fund the Charles R. Drew University of Medicine and Science in the Watts area of Los Angeles. The University is now recognized as a minority-serving institution by the U.S. Office for Civil Rights, and a Historically Black Graduate Institution (HBGI) by the Department of Education. Never losing touch with the University, Dymally later served as a professor in the Life Science Institute, as the first Director of the University’s Urban Health Institute, and in 2010 the newly constructed school of nursing was named in his honor. 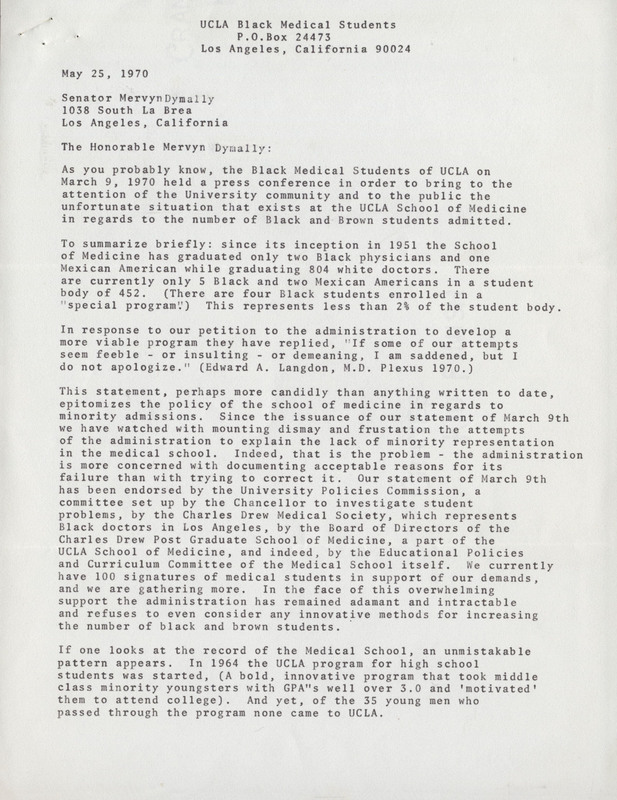 In a letter written by the Black Medical Students of UCLA to Senator Dymally, they express their concern over the underrepresentation of Blacks and Latinos in the UCLA School of Medicine; as Blacks and Latinos only represent 2% in the program. On 9 March 1970, the students petitioned for a program that would help admit more Black students. Although the petition received over a hundred signatures, the administration did not take steps to address the issues outlined in the petition with recruiting students and the educational disparities that students of color face at UCLA. The most recent data from the American Association of Medical Colleges shows that while some progress has been made since this letter was written, the racial disparity among U.S. doctors continues to be stark. African Americans represent only 6.2% of medical school graduates and 5% of active physicians.

In 2003, thirty years after passing the legislation to fund Charles Drew, The U.S. Institute of Medicine Committee on Understanding and Eliminating Racial and Ethnic Disparities in Health Care put out a report outlining “Unequal Treatment” in the health system. The report found:

Racial and ethnic disparities in health care exist even when insurance status, income, age, and severity of conditions are comparable, And because death rates from cancer, heart disease, and diabetes are significantly higher in racial and ethnic minorities than in whites, these disparities are unacceptable.

The same year Dymally returned to office in California as a State Assemblyman, serving until 2008. This time, Dymally chaired the Assembly Committee on Health and focused his legislative efforts on HIV/AIDS care for African Americans and elder care abuse, including Assembly Bill 1142. The bill established an initiative coordinating prevention and care in California to address the disproportionate impact of HIV/AIDS on African Americans in the state. Upon leaving the legislature in 2008, he became president of the Central Neighborhood Health Foundation, the same community organization in South Los Angeles that he helped revive in the late 60s with funding from the legislature. 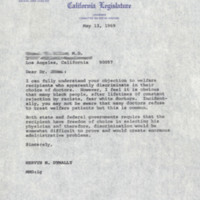 In this letter, Dymally replies to the concerns of a constituent, who is a medical doctor, about welfare recipients who discriminate in their choice of doctors. 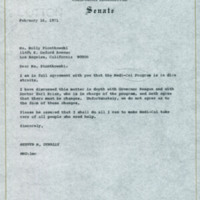 While Governor of California, Ronald Regan’s efforts to defund the newly enacted state Medicaid Program, Medi-Cal, were largely defeated. His efforts were either blocked by the democratic speaker Jess Unruh or by the courts. 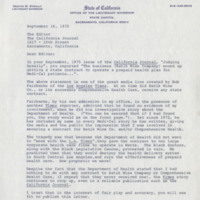 In this letter, Dymally defends his reputation and disputes his involvement in a private company gaining a public health plan for Medi-Cal recipients.

← Blowin’ Out Barriers: Ethnic Studies & Educational Equity
“I Am Because We Are”: Community Building & Coalition Work →
The Denial of a Human Right: The Inequality of Healthcare