"If you check the stats – the murder rates in the years I was a teenager and the incarceration rates in L.A. in my section of the Crenshaw district, of the Rollin 60s when I was 14, 15 – none of my peers survived. None of my peers avoided prison. None of 'em, Everybody got bullet wounds and felonies and strikes. So to make it out mentally stable and not in prison and not on drugs, that's a win. That's a victory in itself. "

The letters written by incarcerated people to Dymally provide additional insight into the treatment of incarcerated people and the conditions of the CA prison system in the late sixties and seventies. As Lt. Governor, Dymally was committed to prison advocacy, and pushed for the first “Negro History Club,” to be organized by Eldridge Cleaver at Soledad State prison. The 1970s marked a critical point in the carceral state, as prison systems moved from rehabilitative measures to more punitive policies. As noted by Ruth Wilson Gilmore, California began the largest prison building project in the nation during the 1970s. Following an unannounced visit to Soledad Prison in June of 1970, Senator Dymally co-authored a Black Caucus report, Treatment of prisoners at California training facility at Soledad Central, and introduced Senate Bill 323 that would have formed a California Commission on Prisoner Rights. Dymally visited all the prisons in the state. A questionnaire prepared by the Legislative Investigative Team of the Black Caucus asked nine questions, and the final report included letters for incarcerated men describing the deplorable conditions of the prison, and dehumanizing treatment by prison officials.

In February 1970, Dymally ordered an investigation into Soledad Prison, following alarming reports of abuse, racial tensions and violence in the yard of the O-wing, and the shooting and murder of three Black men (W.L. Nolen, Cleveland Edwards, and Alvin Miller) by a guard during a guard-organized fight with the Aryan Brotherhood. The District Attorney of Monterey County issued a ruling of justifiable homicide, and legislators received letters from incarcerated men in the O-wing that questioned the investigation by an all-white committee, and contradicted the statements made by prison authorities. One Black man shot on the yard was denied life-saving medical treatment. Additional letters from Black men detailed the harassment by prison guards, which included the use of racial epithet, contamination of food, racial violence, and continued incitement by both prison staff and other incarcerated men. The same month, two incarcerated men in San Quentin State prison wrote to Dymally, expressing concern about the “funny death of Fred Billingsley,” the fourth murder of an inmate at this prison. 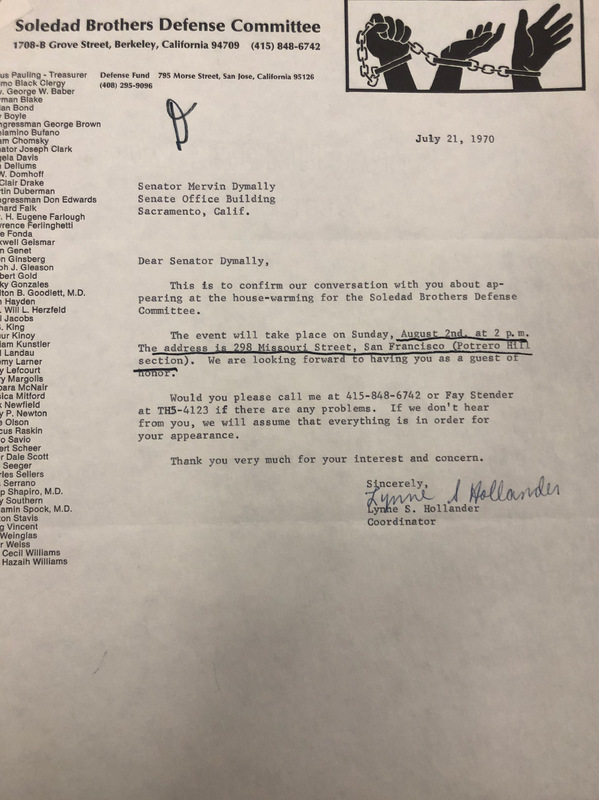 In a 21 July 1970 letter, the Soledad Brothers Defense Committee confirmed that Senator Dymally would attend an housewarming for the committee.

Additional letters from Black men detailed the harassment by prison guards, which included the use of racial epithets, contamination of food, racial violence, and continued incitement by both prison staff and other incarcerated men. The same month, two incarcerated men in San Quentin State prison wrote to Dymally, expressing concern about the “funny death of Fred Billingsley,” the fourth murder of an inmate at this prison.

Dymally met with George Jackson at Soledad prison; Jackson was one of three that were charged with the murder of a prison guard, a capital offense. Jackson, a co-founder of the Black Guerilla Family, documented the problems with O-yard, and stressed the necessity to protect Blacks from attacks by racist guards, calling it “selective retaliatory violence.”  Following an August 1971 meeting with his attorney, a prison guard escorted Jackson back to his cell, and Jackson pulled a gun, ordering the guard to open the cells. Five dead hostages were found in Jackson’s cell, and three prison guards survived. Jackson and his friend Johnny Spain escaped to the prison yard, and Jackson was shot and killed. Six incarcerated men, known as the “San Quentin Six,” went to trial; three were acquitted and three were convicted. In September 1971, the Attica uprising began; 1,281 incarcerated men held thirty-nine prison guards and hostages for four days. Conditions in Attica Correctional Facility in upstate New York mirrored that of Salinas, Soledad, Chino, San Quentin, and other state prisons across the nation.

The treatment of incarcerated people by prison employees has not changed; prison guards incite inmate violence, and organize attacks, like the January 2020 disturbance in the Mississippi correctional facilities.

Dymally and staff aides interviewed incarcerated men for two days at the Soledad prison, and the interviews revealed a disturbing culture of violence organized by prison guards and staff, against the 2800 men in Soledad: cell doors were intentionally opened to promote inter-racial fights between groups, men were suddenly removed from the general population, and one Mexican American male was denied assistance in reading a letter from his attorney. The interviews also revealed the lack of medical care for the men at Soledad; a critical issue that still remains in the contemporary landscape. Following the first visit, seven incarcerated men were transferred to the O-wing as punishment for soliciting donations for the Soledad Brothers.

Recommendations from the Black Caucus Report stressed the immediate need for a more thorough investigation into the treatment of men by prison employees, creation of a Board of Overseers, immediate attention to mental health, demanded an end to violence by prison employees, urged that prison rules be changed to prevent unfair trial practices, the ending of false accusations of inmate behavior, immediate medical attention for all men in Soledad, and educational training and ethnic studies training for guards, access to educational materials, and that Black be afforded more opportunities in the work training programs. 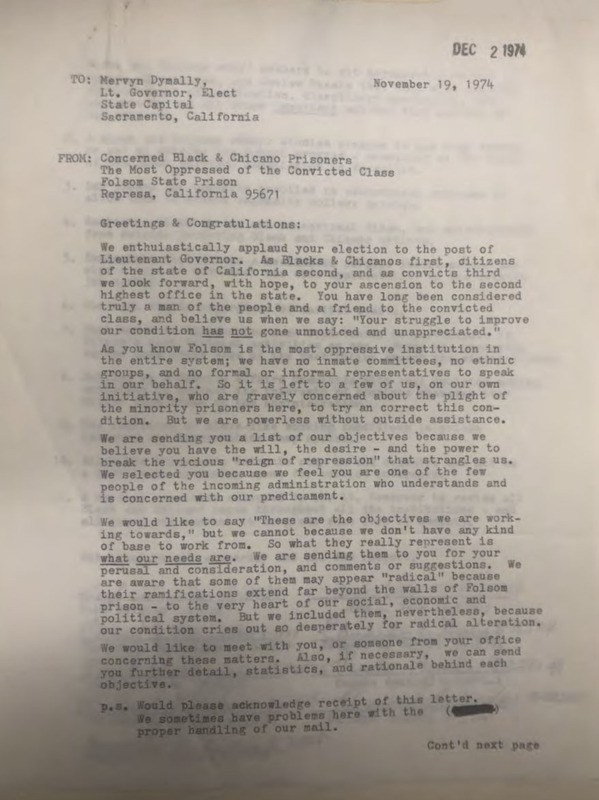 In a 19 November 1974 letter written by a group of "Black and Chicano Prisoners," at Folsom State Prison, the authors congratulate Dymally on being elected as Lt. Governor.

In November 1974, a group of Black and Chicano men wrote to Dymally and listed eleven objectives to immediately improve the conditions in the Folsom State Prison, and the treatment of incarcerated men and women in the prison.

The authors explain that they have listed their objectives, and express hope that Dymally can assist them in "breaking the vicious reign of oppression." The authors clarify that the objectives are what is needed, and clarify that although some of the items listed can be considered "radical," as they reveal the inequality of the economic, social, and political institutions in this nation that created the carceral system.

The group lists eleven objectives that stress the need for representation on boards, committee and review panels, creation of Ethnic Studies programs in the high-schools, day passes for students enrolled in educational programs, realistic media that features Black and Chicano artists, meaningful employment inside the prison that will enable employment outside the system, conjugal visits, equity for incarcerated women in activities, the establishment of the Convict Affairs Committee, the abolition of "slave-like," working conditions, including Conservation camps, allow for the Prisoner's Union to negotiate and address concerns with officials, and a select committee of people to review Black and Latino cases. The letter is signed by nine men incarcerated at Folsom State Prison.

Any initiatives, policies, and "good" intentions by people and non-profits that seek to abolish the current white-supremacist institution designed to dehumanize and cage people in an unjust justice system will not work unless incarcerated and formerly incarcerated people are at the table leading the discussions.

The Los Angeles Regional Reentry Partnership has started to collect the oral histories of men and women experiencing incarceration. These important stories will form the LARRP and Project Rebound Oral History Collection; a collection dedicated to the experiences of formerly incarcerated and incarcerated people.

Genea Richardson reads a letter written by a woman experiencing incarceration details the inhumane treatment and lack of medical care during the COVID19 pandemic.

Lami Glenn reads a letter from a woman experiencing incarceration and the conditions of prison during the COVID19 pandemic. 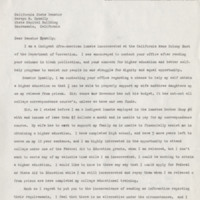 An incarcerated person asks Dymally about obtaining a higher education in order to support his family, a wife, and three daughters, after completing his sentence. He states that the governor cut funding for college correspondence courses. 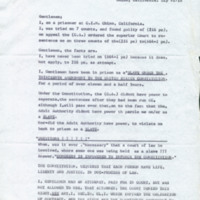 A letter from an incarcerated person in the Chino prison facility, the author states that he was tried on seven counts and found guilty on three accounts. 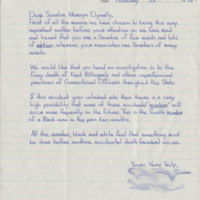 ← A Life in Public Service
Everything is Not Golden in California: State Violence & Unjust Systems →
Letters Behind Bars: Writings from People Experiencing Incarceration