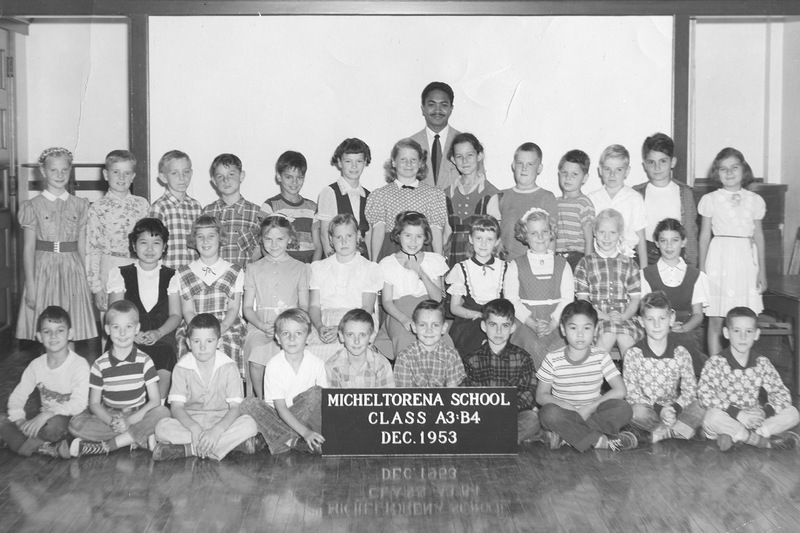 Beginning in 1953, Dymally taught in the elementary schools in Los Angeles.

As an educator in the LAUSD schools, Dymally recalled his time as a fifth-grade teacher and the horror he felt at the textbooks he was required to use portraying African Americans as either racist caricatures or only included the names of Booker T. Washington and George Washington Carver. History textbooks used in elementary and secondary classrooms perpetuated the Lost Cause ideology that minimized enslavement, produced a fictional interpretation of the American Civil War, glorified Confederate soldiers, and created a sanitized account of American history. 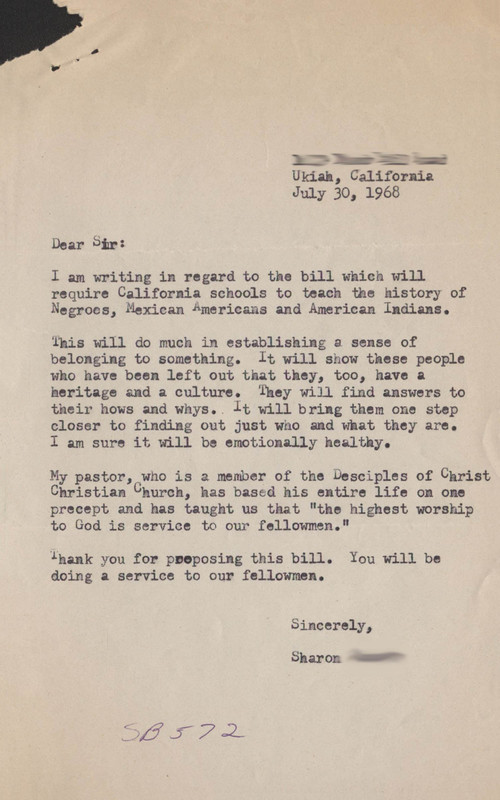 As a California State Assemblyman, Dymally introduced legislation to mandate the inclusion of Black history in California textbooks. The legislation was later expanded to include the history of other people from races and ethnicities.

In an October 1970 address to the Association for the Study of Negro Life and History Senator Dymally spoke of “the struggle for the inclusion of negro history in our textbooks…” Dymally was proud of the legislation he introduced to change those textbooks. AB 580, which passed in 1965, required California textbooks to include Black History, and SB 572, which passed in 1967, expanded the requirement to include Mexican Americans, American Indians, and other racial and ethnic groups. Even still, Dymally continued to be appalled by the absence of coverage of African Americans' political participation, particularly in the Reconstruction period. He implored his audience:

Therefore, it is your challenge to reconstruct the past, so that black men and black women and black children will know that their political history is one of which they can be justly proud. It is your responsibility to document the facts, not only for today’s generation, but tomorrow’s children.

In 1969 Dymally joined Percy Sutton, Dr. Kenneth Clark, and Luis E. Martin to form the Institute for Black Political Education at Howard University by securing a large grant from the Ford Foundation. The institute later grew into The Joint Center for Political and Economic Studies, which remains an influential think tank today.

An ardent supporter of school desegregation, Dymally authored a 1970 memo in the journal The Black Politician with fellow State Senator Albert S. Rodda in support of bussing as a method for decreasing segregation in California. In that memo, Dymally pointed to the Berkeley City Unified District as a model for school desegregation with its widespread bussing use. This program may be familiar to many today, as Vice-President Kamala Harris recalled her experience going up in Berkley and being bussed to elementary school in a 2020 presidential debate. She rebuked then opponent Joe Biden for opposing school busing for desegregation as a U.S. Senator in the 1970s.

Dymally’s legacy in education is reflected in the schools named after him, including the Mervyn M. Dymally School of Nursing at Charles R. Drew University of Medicine and Science in Los Angeles and Mervyn M Dymally Senior High School in Watts Learning Center. 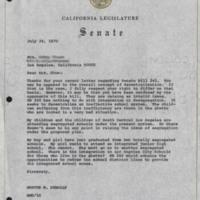 Dymally suggests in this reply to a constituent, that they may misunderstand the workings of the Senate Bill 242. He explains the Bill is going to help children who are experiencing an ineffective school system. 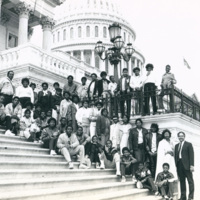 Dymally and students of the Rosevelt Jr. Highschool on the steps of the Capitol Building in Washington D.C. 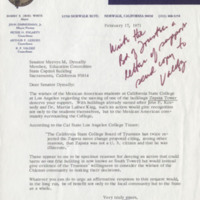 Norwalk City Councilman Valdez wrote Dymally on behalf of Mexican American students at California State University, Los Angeles, asking for his support in changing the name of a building at the university from “South Tower” to “Zapata Tower” in Honor of Emiliano Zapata. 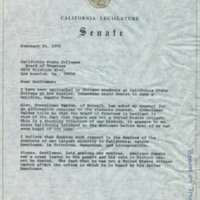 Dymally uses strong language to implore the CSU board to stop using xenophobic excuses and heed the call of “the largest minority in California,” to rename a building at Cal State LA in honor of the Mexican Revolutionary, Emiliano Zapata.

← Everything is Not Golden in California: State Violence & Unjust Systems
The Denial of a Human Right: The Inequality of Healthcare →
Blowin’ Out Barriers: Ethnic Studies & Educational Equity