Everything is Not Golden in California: State Violence & Unjust Systems

The history of state violence in California has roots in the destruction of indigenous language and cultures by the 1840s, as land and natural resources stolen under the guise of the Treaty of Guadalupe Hidalgo and the “Gold Rush,” simultaneously ushered in statehood, white hegemonic rule, and a century of racial violence, and cultural erasure. State violence is the imprisonment of the indigenous in a carceral system that dehumanizes people. State violence is the deportation of the Chinese in the late 1880s, and the stealing of indigenous children by white government officials that shipped the children to boarding schools.  Racial violence, like the lynching of Mexicans, occurred as the result of nativist sentiment in the state. State violence then, is cultural erasure, destruction of the environment, and as Gloria Anzaldúa noted, a contested border in which language, culture, and traditions were erased through violence.

State violence is the economic, social, and political conditions that seek to perpetuate a cycle of poverty and violence in our communities while denying agency, identity, space, educational equity, and resources. State violence is the “open-air” prisons contained by concrete barriers, like freeways, and the policing of Black and Brown bodies in South Central, Watts, and Compton. It is the concrete jungle in which public housing looks like military barracks, and people are treated as criminals, with no due-process; watched, harassed, arrested, and murdered by law enforcement. Constituents critiqued Dymally's support of the Black Panthers in one example demanding retributive police violence for said support. Dymally was a conspicuous supporter of the Black Panther Party, for instance, as a first responder to the December 1969 LAPD SWAT raid and ensuing 5-hour shootout at party offices and subsequent protests at city hall. 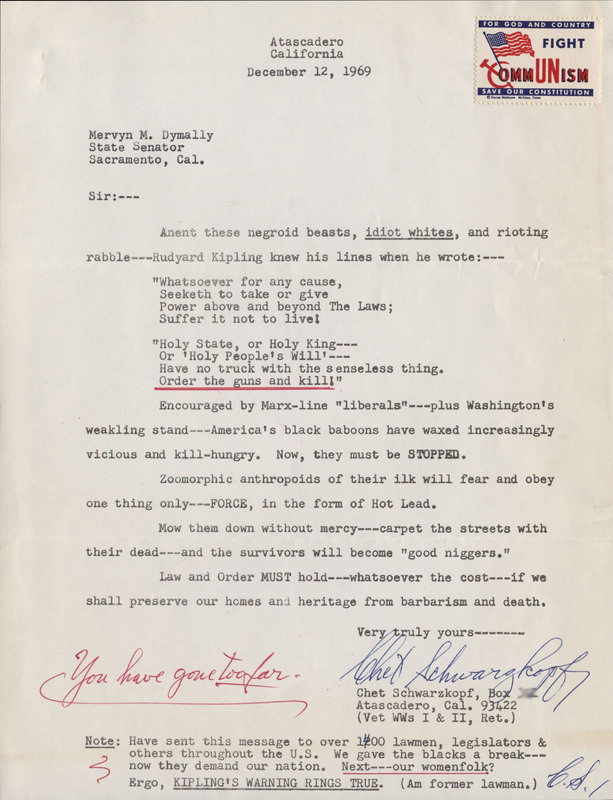 One letter authored and signed by former US Marshall Chet Schwarzkopf was more notorious; the letter was also published in KKK newsletters and in a 1969 report commissioned by presidential executive orders documenting causes and preventing violence.  Despite Schwarzkopf's established affiliations with domestic terrorist groups, he was still often published in the Los Angeles Times and other local newspapers repeating thinly veiled white supremacy rhetoric throughout the '60s and '70s.

State violence is poverty, the trauma that Black women experience,  the racist ideologies that are perpetuated by the media, the trauma of gun violence and our students, the hatred of Black, Indigenous, and people of color, immigrants, and working-class bodies, the politicians with their unkept promises, and shady behavior that displaces their own community, and the educational, racial, and environmental disparities that impact our children.  State violence is destroying Black businesses, in the past, and current landscape; burning entire blocks, lynching Black business owners, and boarding up an entire corner with a chain-length fence to appease future gentrifiers.

State violence is the denial of medical care and the denial of resources that sustains healthy communities.  State violence is the laws that sustain unequal sentencing, a state prison system that strips people of their humanity, assigns a number to replace the spirit locked in an institution that is designed to hustle the public and appropriate tax dollars to catalog, warehouse, and egregiously exploit prisoner labor while claiming state valor.

State violence is the hegemonic practice of humiliation, verbal-physical-psychological-emotional abuse, extreme isolation, multiple deprivations; the consummate denial of fundamental human rights and dignity is akin to rehabilitation when their wards are the poorest and most severely traumatized among us.

State violence is the capitalist privatization of prisons and the unionization of correctional officers who share a vested interest in high recidivism rates provoking violence to quell peace on the yard- and impeding progressive programming like higher education or life skills development to perpetuate criminality protecting their profits and job security.

Not one of us is left unscathed for lack of familiarity with this system.

Dymally's correspondence allows historians to precisely decipher networks of harassers previously anonymized through institutional violence.   The letters in this section reveal the unjust treatment of people of color and begin with a 1972 letter written by a couple in London that is critical of racial violence and stresses that “white Americans will only do harm with this attitude....” In a letter, Dymally asked that Attorney William Barr reopen the federal investigation into the police murder of two Samoan brothers, Pouvi and Italia Tualaulelei, and received a letter from the mother of a young woman racially profiled during a law enforcement stop in Compton, CA. The 1992 South Central rebellion following the acquittal of four white police officers in the beating of Rodney King in Sylmar revealed the long history of police violence towards the Black community, and the Association of African American in Fire Service issued a statement critical of the King verdict and the policing of the Black community. 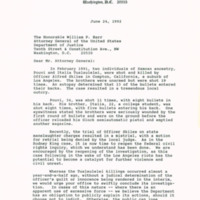 In the letter to Attorney General of the Justice Department William P. Barr, Congressman Dymally writes about the murder two Samoan brothers from Compton, California. 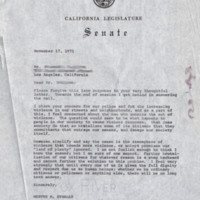 Dymally expresses the increasing amount of violence he is witnessing in neighborhoods. He asks why there is an increase in violence and what is causing it. 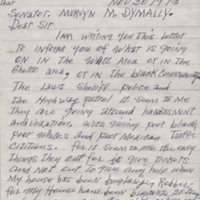 In a 30 November 1973 letter, the author states that he is writing to Dymally to inform him about what is going on in Watts, CA, and the harassment of the Black and Latino community by the LASD and Highway Patrol. 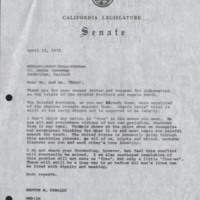 In a letter written by a British couple to Dymally, they request information about the trials of the Soledad Brother and Angela Davis. They ask what can be done, and lament on the racial discrimination and persecution against African Americans. 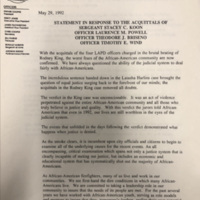 In this public statement issued by the Stentorians, The Association of African Americans in Fire Service rejects the acquittal of four police officers on tril for the beating of motorist Rodney King in Sylmar, CA.